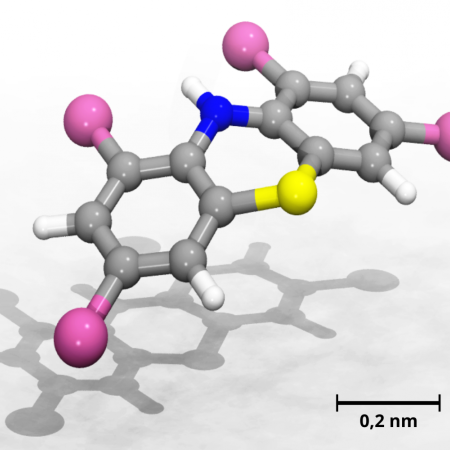 The Mycobacterium tuberculosis causes over a million deaths annually. Especially in third-world countries, it is still a severe problem, which may even worsen due to antibiotic resistance. An international team of researchers, together with Dr. Michal H. Kolář from UCT Prague, has now developed new compounds to fight the bacterium, which had cost George Owell or Jane Austen their lives.

The derivatives of phenothiazine belong to successful drugs. Chlorpromazine, for instance, which is on the World Health Organization List of Essential Medicines, acts on the central nervous system and is used to treat various psychotic disorders. The medical effects of phenothiazine derivatives were discovered in the mid 20th century. Since then, phenothiazine has been used as a lead compound for rational drug design and researchers constantly seek its new analogs with novel modes of action against various diseases. Interestingly, some of the analogs have been shown to inhibit the NDH-2 enzyme involved in the respiratory cycle in the M. tuberculosis.

Surprisingly, a class of phenothiazines with several halogen atoms has been overlooked so far. Now researchers from several universities, including UCT Prague, studied polyhalogenation as a strategy to generate new phenothiazine drugs. Lead by Prof. Tabarrini (Università degli Studi di Perugia, Italy), the team synthesized over twenty polyhalogenated phenothiazines and tested them against M. tuberculosis. They discovered three compounds with stronger antitubercular activity than known molecules. Moreover, their compounds show lower affinity of the receptors of the central nervous system, so they could potentially have lower psychotic side effects.

"Since my postdoctoral stay in Germany, it wasn't really a straightforward path to the phenothiazines," says Dr. Kolář, the co-author of the article published recently in the European Journal of Medicinal Chemistry, and a group leader at the Department of Physical Chemistry, UCT Prague. "We studied something entirely different. We were interested in the interaction between polyhalogenated molecules and a small RNA from HIV. After almost two years we reached a dead end, so we could have either thrown everything into the trash or found another purpose. Luckily, my colleague from Italy got the idea to try the compounds against tuberculosis. And things started moving."

Dr. Kolář performed computer simulations and proposed the first series of compounds (back then for other purposes, though). Then the compounds were optimized to kill the bacterium. The best-performing molecule contains two bromine atoms placed symmetrically on the phenothiazine core. A successful tetrachlorinated derivative was also synthesized.

"We still don't know how exactly the compounds bind to the NDH-2. The situation is even more complicated because the enzyme structure is known in other bacteria but not in the M. tuberculosis," suggests Kolář possible direction of their future research. Although the compounds are far from being used in medical care soon, the knowledge and new principles about polyhalogenation may speed up the hunt for efficient antitubercular drugs.