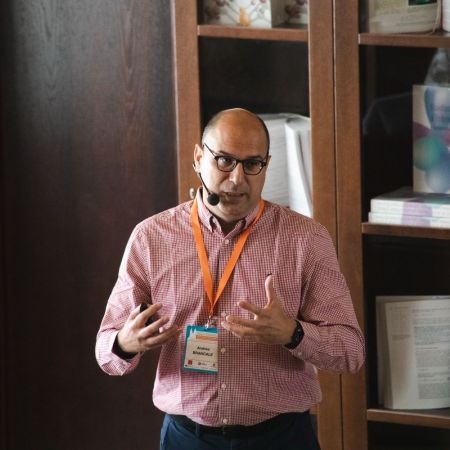 Prague, 1 September 2022 - The ranks of researchers at the University of Chemistry and Technology, Prague, have been expanded with the hiring of top international expert Andrea Brancale from Cardiff University. The internationally recognized scientist was selected after a rigorous interview process for the "Chair Medicinal Chemistry" position. As Chair, Brancale will build a new UCT Prague research group focused on excellence and the production of high-quality scientific outputs in the field of medicinal chemistry. The new, prestigious position was created for an initial period of five years, funded by IOCB Tech in cooperation with the Institute of Organic Chemistry and Biochemistry of the Academy of Sciences of the Czech Republic (IOCB Prague).

“Andrea Brancale is a mature, internationally recognized scientific leader, which is confirmed by his number of publications in prestigious journals (he is the author of almost 200 publications in total), an h-index of 40 (Scopus), authorship of a number of patents, and his speaker invitations to prestigious international conferences,” says Professor Radek Cibulka, head of the Department of Organic Chemistry, responsible for establishing the new position and the interview process. “He has also has a built-up extensive network of international collaborations. In his research, he mainly deals with the application of computer-based methods in the design of novel bioactive molecules, in particular in the field of anticancer and antiviral research. However, as part of cooperation in the Czech and pan-European areas, he plans to expand the area of ​​medicines to other therapeutic areas,” adds Cibulka. In this direction, Brancale is already preparing projects within international consortia (e.g., an NIH grant), but also in the Czech Republic (e.g. involvement in the Johannes Amos Comenius Programme [P JAC]).

“I believe that collaboration between chemists, pharmacists, biologists, structural biologists, and doctors is necessary to quickly apply the results of basic research in clinical practice. Especially when people with different specializations can work together right from the initial stages of a project,” says Professor Brancale, adding that creating such a research environment around him is one of the goals of his time at UCT Prague. Brancale, whose position of extraordinary professor in chemistry was approved by the UCT Prague scientific council, will also be involved in teaching students, primarily within the Drugs and Biomaterials doctoral study programme. He has already created the framework for a new subject, Drug design and discovery, for this programme. He will also be involved in the training of Bachelor’s and Master’s students within the Drug Synthesis and Production and Chemistry study programmes. Another important activity will be his mentoring young junior teams working at UCT Prague in the field of medicinal chemistry. Already this year, as a UCT Prague representative, he spoke at the Prague–Weizmann School on Drug Discovery, which UCT Prague organizes annually in cooperation with IOCB Prague and the Weizmann Institute of Science (Rehovot, Israel).

In connection with the appointment of Professor Brancale, the Department of Medicinal Chemistry was also established at UCT Prague, headed by Brancale, which will operate within the new laboratory premises recently built by UCT Prague for the work of teams conducting ground breaking research.

The University of Chemistry and Technology Prague (UCT Prague) is a natural center of study and cutting-edge research. One of the largest educational and research institutions in Central Europe, it specializes in technical chemistry, chemical and biochemical technologies, material and chemical engineering, food chemistry, and environmental studies. Remarkably, of the more than 4,000 students at the school, 700 are enrolled in PhD programs on average. Some of the study programs on offer at UCT are unique in the Czech Republic and are key to the future of the entire country. The school collaborates with more than 100 academic institutions, namely within Europe but also in the USA, Canada, Japan, Vietnam, and elsewhere.