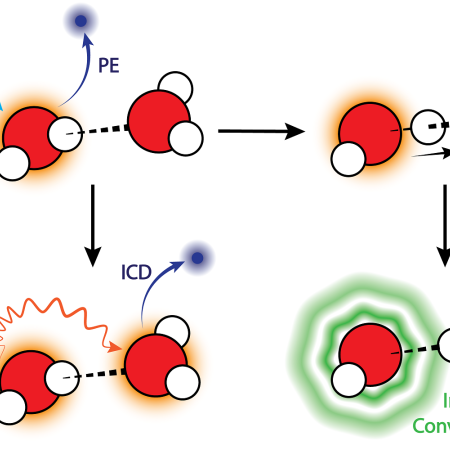 The Theoretical Photodynamics Research Group at the University of Chemistry and Technology’s Department of Physical Chemistry together with German and French colleagues have described the competition between proton transfer and intermolecular Coulombic decay (ICD) in water in a new Nature Communications article. The article reflects several years of effort by the team in investigating this topic.

Photochemistry typically concentrates on the interaction of UV or visible light with molecules, forcing the valence electrons to move. Some chemists are sceptical of photochemistry, because light can lead to unwanted products. X-rays have a particularly bad reputation because of their role in radiation damage rather than their usefulness in observing chemical reactions. The pioneers of rentgenlogy have experienced the negative effects of X-rays.  It is therefore surprising how humble our knowledge on the molecular mechanism of ionizing radiation is. We only know that water is the key for the undesratding as it constitutes  a primary component of the human body.

In their new article, scientists from Leipzig, Prague, and Paris focused on the question of what happens after irradiation in water during the first few femtoseconds. In particular, they were interested in so-called intermolecular Coulombic decay (ICD): a ubiquitous relaxation channel of electronically excited states in weakly bound systems. This phenomenon was first observed experimentally in the water in 2010 and may play a large role in biological systems.

“A few years ago, we calculated that ICD could be suppressed an ultra-fast chemical reaction, proton transfer, between adjacent molecules,” said Professor Slavíček. “I mentioned our results to Uwe Hergenhahn, who first observed ICD in 2010. Uwe, to my surprise, pulled out some data from a drawer which is confirmed by our prediction. Still, it took several years before we were able to compile everything into a form everyone was happy with.”

The behaviour observed by the research collaborators is the result of the quantum nature of hydrogen atom: if the water were made of heavier atoms, it would behave quite differently. Results indicate that small strongly hydrogen-bonded systems are less susceptible to damage from slow autoionization after irradiation than previously thought. Thanks to their joint efforts, the scientists now know how to examine irradiated water, to model the behaviour of electrons, and how to monitor chemical reactions.

The UCT team has been using photochemistry for several years in order to observe new phenomena, gaining experience modelling photochemical reactions. With the help of molecular modelling, several new, unpublished phenomena have already been discovered which could lead, for example, to new methods for studying materials. The ultimate goal is to show that X-ray radiation is not only a destructive, but that it can also modify the molecules.

The key to accurately manipulating molecules is to control radiation in terms of both energy and time. In recent years, opportunities for conducting such research have been expanding rapidly. There are more synchrotron radiation facilities from which it is possible to obtain tunable X-rays, and the first few X-ray lasers with free electrons have also appeared (with these, an X-ray can be controlled with femtosecond time resolution). Such equipment is, however, expensive and is comparable in terms of cost to the tools employed in particle physics. But thanks to such developments, we are moving closer to a deeper understanding of the material world around us.