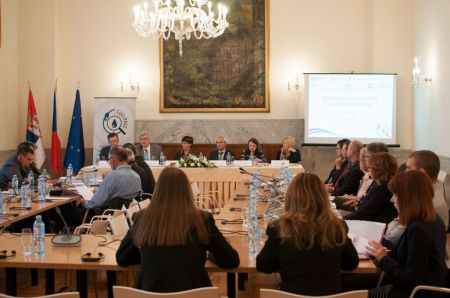 The final event of the FUELPAGE project consortium, the Second Capacity Building Training Workshop, was held on 20 September in Belgrade, at the premises of the Embassy of the Czech Republic.

Following joint work and activities in the framework of the FUELPAGE project conducted since the official launch of the project in February, the University of Chemistry and Technology, Prague (UCT) in cooperation with the Czech Association of Petroleum Industry and Trade (ČAPPO) delivered the second and final training workshop to a group of representatives of the beneficiary institutions – the Serbian Market Inspection of the Ministry of Trade, Tourism and Telecommunications, the Serbian Ministry of Mining and Energy, the National Petroleum Committee of Serbia and the Faculty of Mechanical Engineering of the University of Belgrade.

Bearing in mind that the early months of implementation of FQM framework in Serbia raised numerous questions in terms of its adequate implementation and the need for further adaptations of the established system, the workshop attracted wide attention among beneficiary institutions and resulted in prolific and straight-forward discussions aiming at drawing joint conclusions.

The workshop presentations delivered by the Czech know-how providers represented by UCT and ČAPPO covered the following topics:

As the conclusion, the Czech partners provided an outline of recommendations for the improvement of the Serbian FQM and the workshop was followed by the project Working Group meeting where joint discussions continued on the finalization of the project Study with Short-Term and Long-Term proposals for the enhancement of the Serbian fuel quality monitoring framework based on the best practices applied in the Czech Republic and needs of the Serbian partners. The final project months will be dedicated to delivering this joint task of the FUELPAGE project Working Group.

The FUELPAGE project is co-financed in the framework of the CEI Know-How Exchange Programme (KEP Italy), sponsored by the CEI Fund at the EBRD entirely financed by Italy. The CEI grant amounts to 17,445 EUR out of a total project cost of 48,100 EUR.