The most talented chemists in the world coming to Prague 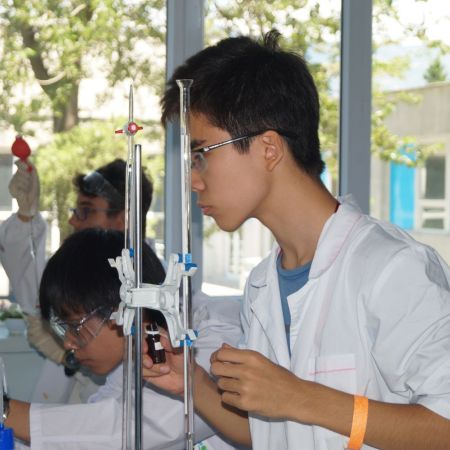 Prague, June 28, 2018 – Together, Czechia and Slovakia are hosting the 50th anniversary of the International Chemistry Olympiad, from July 19-29, 2018. Symbolically, in 1968, just before the invasion of Warsaw Pact troops, the historic first year of this competition for talented high school students took place in the former Czechoslovakia. At that time, 18 students from the three states of today’s Visegrád Four alliance took part in the Olympiad. This year, over 300 contestants from 76 countries will compete in Prague and Bratislava.

The opening ceremony of the Olympiad will be held at Bratislava’s Old Market Square on July 20. Winners will be awarded during the ceremonial announcement of results which will take place eight days later in Prague’s Rudolfinum.

Individual representatives have gone through demanding competitions in national rounds and are usually each country’s four most talented students in the field of chemistry. Czechia will be represented by Miroslava Novoveská from Pilsen, Jan Obořil from Brno, Josef Tomeček from Slavičín, and Richard Veselý from Prague. At the Olympiad, they—together with other contestants— will complete three practical tasks in laboratories and eight theoretical tasks.

“The opportunity to organize the International Chemistry Olympiad is a great privilege. Last year, in Thailand, the ceremonies were held with the royal family in attendance. Next year’s event in Paris will be presided over by Jean Marie Lehn, Nobel Prize winner in chemistry,” said Karel Melzoch, Rector of the University of Chemical Technology in Prague, responsible for the Czech organization of this year’s Olympiad. The Slovak part of the program was organized by Comenius University in Bratislava.

In addition to a professional competition, a rich accompanying program with a number of sightseeing trips and sporting activities has been prepared for the contestants and their mentors. The biggest event will take place on Wednesday, July 25: the Summer IChO Party in Prague-Dejvice. Popular rock groups Tata Bojs and Kapspark as well as the singer Debbi will perform musical productions and other activities include interactive chemical experiments, a big fireworks show, presentation of the elite anti-chemical unit of the Czech Army, and a high-quality street food market. The event is open to the public.

“We have been preparing for the Olympiad for two years. This is an anniversary year and, at the same time, we are celebrating the 100th anniversary of the establishment of Czechoslovakia, so we wanted to exceed expectations and prepare for our guests a program for the Olympiad that they have not yet experienced yet,” said main organizer at UCT Prague, Petr Holzhauser. “I believe that everything will be done and that our guests will enjoy ten days full of chemistry, fun, and cognition of the Czech and Slovak beauties,” he added.

The importance of the International Chemistry Olympiad, with a budget exceeding 40 million Czech crowns, is well understood by representatives of Czech institutions. Financial support and auspices were graciously provided by the Czech Ministry of Education, Youth, and Sports; the City of Prague; Prague 6; the Czech Olympic Committee; and a number of large private entities led by the Platinum Partner of the Olympiad: Unipetrol Group, the only oil processor and the largest refining and petrochemical company in Czechia.

“Unipetrol's strategic partnership with UCT Prague dates back 17 years. Together, we award interesting diploma theses, provide scholarships, and contribute to nationwide projects such as the Chemistry Olympiad or the Modern Chemistry Hour. In 2015, we opened the University Center Prague - Unipetrol, where university students can study one of the four chemical disciplines on the premises of our chemical plant in Litvínov. This leads to the desirable interconnection of theory and practice,” says Tomáš Herink, Member of the Board of Directors of Unipetrol Group, responsible for investment, research, and development.

Other partners of the Olympiad are VWR International, Amgen, Casio, České dráhy a.s., Dermacol, Gilead Sciences, IOCB Tech, and the Bratislava Tourist Board.

Media partner is Český Rozhlas Plus.

Selection of students for the Czech team

Students were carefully selected using a three-round selection process in Czechia. The first criterion was the placement in the National Round of the Chemistry Olympiad in Hradec Králové, from which the top 16 students were invited to the theoretical preparatory meeting at UCT Prague. After further selection of the best 8 students, a practical preparatory focus was organized by the Faculty of Science at Charles University, the team was narrowed to four. Three of the four representatives already competed in Thailand last year as medalists.