Prague, June 26 – The University of Chemistry and Technology, Prague, awarded the honorary title doctor honoris cause to Professor Jean-Marie Lehn. The French chemist is a prominent figure in science worldwide and received the Nobel Prize in Chemistry in 1987.

On June 26, 2019, during a ceremonial gathering of the university’s academic council at Strahov Monastery, Professor Lehn was granted an honorary doctorate. The Academic Council of UCT Prague very rarely grants honorary scientific degrees and this was only the fourth such award in the new millennium.

“Professor Lehn’s contribution to the development of chemistry as a scientific discipline is undeniable. In addition to the Nobel Prize, his more than 1,000 scientific publications and his major influence on the definition of a new area of chemistry called supramolecular chemistry,” said UCT Prague Rector Karel Melzoch. “Professor Lehn has been closely involved with our university for many years, and beyond collaborative scientific publications he has also been a mentor for several of our students and graduates. His name is associated with the traditional prize for gifted chemistry students that the French Embassy in Prague awards each year for outstanding research work,” Professor Melzoch added.

“I warmly thank the University of Chemistry and Technology, Prague, for this award and, at the same time, I appreciate its high level of teaching and research activities,” said Professor Lehn during the ceremony, also considering the role of scientists in contemporary society: “I firmly believe that, above all, scientists have primary responsibility for truth. If this assumption is fulfilled, then a social responsibility comes into play.” According to Lehn, the development of chemistry and science in general is an irreversible process that does not offer the possibility of going into reverse gear. “Knowledge cannot be stopped and cannot be eradicated. We need to deepen and extend our knowledge so that we can control our destiny,” the French scientist said in closing.

Jean-Mari Lehn graduated from the University of Strasbourg and then worked for a year at Robert Burns Woodward's laboratory at Harvard where he participated in the synthesis of vitamin B12. After returning to the University of Strasbourg, he began working on a range of topics in organic and physical chemistry, then focused more on biological processes, leading to the synthesis of macrocyclic compounds with cavities called cryptands. He won the Nobel Prize in 1987 together with D. J. Cram and Ch. J. Pedersen for the the development and application of molecules with highly selective structurespecific interaction, i.e. molecules that can “recognize” each other and choose with which other molecules they will form complexes.

An honorary doctorate is an academic degree awarded by universities to outstanding personalities of international importance. The University of Chemistry and Technology, Prague, only rarely grants such titles. In recent times, the university has only awarded nine honorary doctorates to major chemists, including Otto Wicherle, Antonín Holý, and Nobel Prize winner Vladimir Prelog. 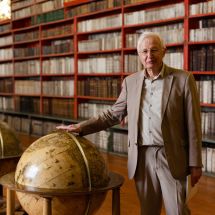 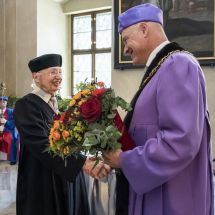 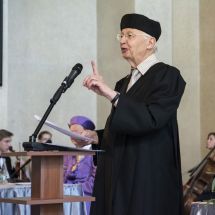 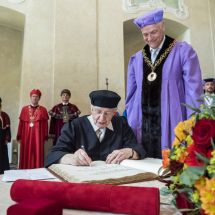 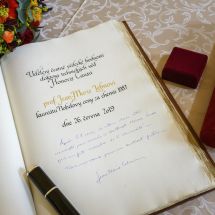