Concentrations of psychoactive compounds in mushrooms are extremely variable 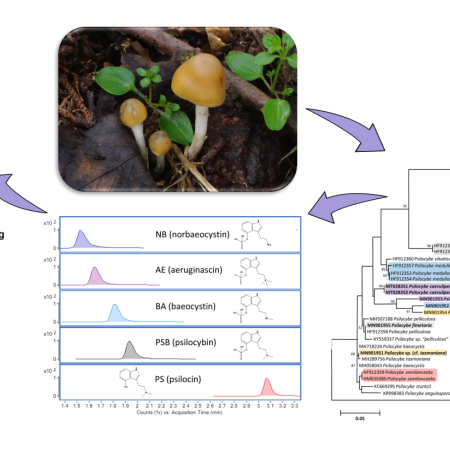 Since not only psilocybin (PSB) but also PSB-containing mushrooms are used for psychedelic therapy and microdosing, it is necessary to know their concentration variability in wild-grown mushrooms. The research now aimed to determine the PSB, psilocin (PS), baeocystin (BA), norbaeocystin (NB), and aeruginascin (AE) concentrations in a large sample set of mushrooms belonging to genera previously reported to contain psychotropic tryptamines

Nevtheless, Fungi are an understudied, biotechnologically valuable group of organisms. Numerous biologically active compounds (secondary metabolites) have been described from mushrooms (macromycetes), and among them, psychotropic tryptamines have played fascinating roles in both ancient and modern human history. The main fungal tryptamines (Figure 1) are psilocybin (PSB) and psilocin (PS), while the minor tryptamines are baeocystin (BA), norbaeocystin (NB), and aeruginascin (AE). However, the psychotropic effect of BA, NB, and AE has not been fully established. It has been reported that the same dose of BA administered produced a psychotropic effect as the same dose of PSB. However, BA and NB may not be psychoactive per se, but they can be transformed by PsiK kinase and PsiM methyltransferase to PS, which is psychotropic.

Researches now conducted a new study focused on Extensive Collection of Psychotropic Mushrooms with Determination of Their Tryptamine Alkaloids. Ultra-high performance liquid chromatography coupled with tandem mass spectrometry was used to quantify tryptamine alkaloids in the mushroom samples. Concentrations of five tryptamine alkaloids were determined in a large sample set of 226 fruiting bodies of 82 individual collections from seven mushroom genera. For many mushroom species, concentrations of BA, NB, and AE are reported for the first time. The highest PSB/PS concentrations were found in Psilocybe species, but no tryptamines were detected in the P. fuscofulva and P. fimetaria collections. Therefore, “the tryptamine concentrations in mushrooms are extremely variable, representing a problem for mushroom consumers due to the apparent risk of overdose. The varied cocktail of tryptamines in wild mushrooms could influence the medicinal effect compared to therapy with chemically pure PSB, posing a serious problem for data interpretation.” said principal researcher Martin Kuchař from Department of Chemistry of Natural Compounds, University of Chemistry and Technology Prague.

Text is based on the research article: