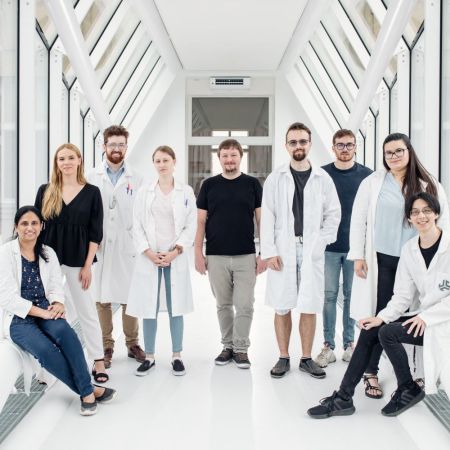 Immediately after the Russian invasion of the Ukraine in February 2022, Petr Kovaříček, recipient of a 2021-2023 Experientia Foundation Start-Up Grant, offered, via social networks, that he would employ female Ukrainian scientists prevented from conducting research at home in his UCT Prague research group. “I knew I had no influence on diplomacy. But what I could do as a scientist was to quickly open positions for refugee scientists, considering especially the situation of Ukrainian female colleagues with children. It was a very spontaneous decision,” explains Kovaříček.

Two Ukrainian researchers took advantage of his offer. Through social networks, Petr was first contacted by a young scientist, a doctoral candidate at Karazin University in Kharkiv, Anna Heleveria (left front in the laboratory picture), who was conducting research in organic synthesis. “Anna fled the war together with her six-year-old daughter, and they completed a rather dramatic journey. They travelled by train from Kharkov with fifteen other people in one compartment with darkened windows so as not to be a target for snipers. Due to the impassability of the crossings in Przemyśl and Užhorod, they ended up going through Hungary, and after four days (!) of travelling, both finally arrived safely in Prague. There I picked them up at the station and escorted them to the UCT Prague dormitories,” says Kovaříček. “A big thanks goes to UCT Prague, especially to the Department of International Relations and the Personnel Department and The Administration of University Facilities, who arranged all the formalities and administrative details incredibly flexibly,” he adds. “Thanks to their great support, Anna was able to start working in our group right away in March 2022, on a project that combines her expertise from Kharkiv with our focus on surfaces and catalysis, which was a completely new topic for her. Anna is a strong fighter with a cheerful soul and a friendly nature and she quickly fit into our team. And I think that concentrating on a new demanding work task helped her to at least partially displace thoughts about the fact that her husband and the father of her daughter remained in Kharkiv,” explains Kovaříček.

Subsequently, Kovaříček was contacted by another young scientist, namely Daria Artemieva, a student of biotechnology from the National University of Food Technologies in Kyiv (front right in the laboratory picture). “Daria contacted me from a gym in Karlovy Vary, where she ended up with her family because the Assistance Centre for Refugees from Ukraine in Prague could no longer keep up. Thanks to UCT Prague’s great support, Daria was also able to resume research in April 2022,” says Kovaříček. “We involved her in a joint project with Dr. Marko Cebecauer’s team at the Czech Academy of Science’s Heyrovský Institute of Physical Chemistry, were we develop the functionalization of microscopic glass for the study of specific cell interactions. For Daria, it was a thematic leap, from stem cells to the surface chemistry of glass, which she managed smoothly and at the same time, she fit in perfectly with the team,” says Kovaříček.

“I greatly appreciate the extraordinary support that the Experientia Foundation gave us to welcome Anna and Daria into the group, thus avoiding drastic cuts in material and other costs. It also means a lot to me personally, knowing that solidarity and willingness to help are still in us and our society even after two difficult COVID years,” says Kovaříček, emphasizing that his group gained two amazing scientists thanks to this initiative, even though Daria stayed just a few months. “Daria’s alma mater resumed part of its instructional activities in August in Poland, and in September, Daria decided to return to Kyiv and complete her studies there. We wish her luck and courage in the future, which she will still need,” says Kovaříček. Anna Heleveria, on the other hand, decided to stay in Prague and she has currently enrolled in a Czech doctoral programme. “We expect that she will complete her doctorate here at UCT Prague, since her laboratory and university in Kharkiv have been completely destroyed. In her doctoral research, we are trying to overturn the generally accepted paradigm about the role of certain reactions in surface functionalizations and their subsequent use for catalysis, optoelectronics, and sensors,” adds Kovaříček. The Kovaříček Group at UCT Prague, with its Experientia Foundation grant, is doing very well. “We received a Junior STAR grant from the Czech Science Foundation, and thanks to this, we were able to expand the team to 14 scientists, from the Bachelor level to postdocs, including several Erasmus+ students. Most importantly, our chemistry works: we have developed two new organocatalytic systems on our own, we have a photosensitive system that self-assembles by the effect of light, and we are writing the first two separate publications. I am happy that everything is finally starting to go well after COVID,” rejoices Kovaříček. “None of this would have happened without the start-up grant.” adding: “From my personal experience, I would like to emphasize that the grant really functions like a ‘start-up’—you start and it takes you to the next level. It is the best possible way to begin your independent scientific career.”